Conversion rate optimization tends to focus on conversion copywriting for product pages, contact form CTAs, and other content visitors see just before they become a lead or make a purchase. The visitor will fill out a form, schedule a demo, or add an item to their shopping cart, completing an important conversion. Everything that happened before it is important as well, though.

A macro conversion is a highly valuable action, taken by a visitor, which is aligned with the main goal of the website. That is, it is either likely to generate or directly generate revenue. Macro conversions happen when a visitor becomes a lead or makes a purchase, typically.

In B2B, with its longer sales cycles, macro conversions nearly always equate to form fills for a download, demo, trial, free consult, or other action that indicates a clear interest in a product or service. The visitor typically provides contact information and enters a marketing funnel for further qualification and sales follow-up.

Keep in mind that some of the micro conversion examples above might be considered macro if there’s a high probability of revenue generation. For example, say a marketer knows 40% of users who download a free ebook will make a purchase within the next few days afterward. It might be a good idea to count ebook downloads as macro conversions, then, since the action is close to the revenue.

Here’s an example.  A digital advertising agency wants to try a new version of a page aimed at generating signups for free coaching sessions, which are micro conversions. Their page currently has a CTA (call to action) that reads “Book a Free Tutoring Session”. They want to test the CTA “Get Free Tutoring”, which will be “variation 1”.

The arrows represent progress toward macro conversion. There could be any number of micro conversions in the place of the arrows. In our example, visitors might sign up for the free tutoring and later receive an offer for discounted conversion copywriting services from the company. Accepting that offer and making a payment would be a macro conversion.

Assume 10,000 total visitors arrived. Half were shown the original page and the other half saw variation 1. Which version would generate the most revenue?

Even though variation 1’s mCVR is more than twice as high as the original’s, the end result is fewer macro conversions. Perhaps the new call to action (Get Free Tutoring) was catchy and persuasive but when the “free tutoring” was given, it felt more like a hastily-led demo and the expectations mismatch killed the macro conversion rate. If the average macro conversion value is the same, the original would be much more effective in terms of ROI. 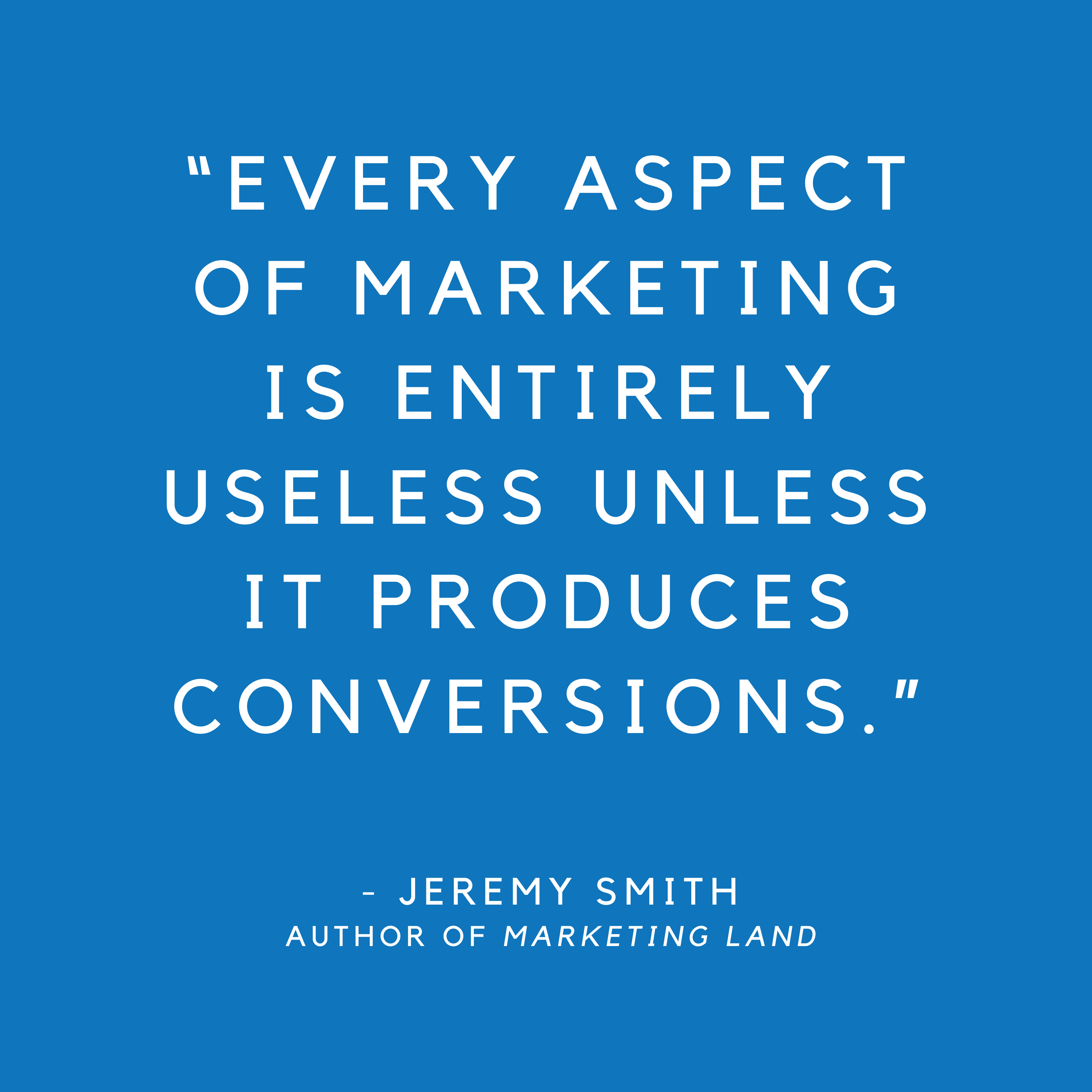 It rings true. Nobody wants to waste time on anything that doesn’t assist the generation of revenue. But how do we know what’s worth the time? How do we prioritize? First, it helps to get familiar with the two types of micro conversions.

When testing elements related to a process milestone, try to imagine how they will affect macro conversions. For example, making a website faster (without changing the design or content) will almost certainly have a positive impact on micro CVR without the opposite effect on macro CVR. That means it’s probably a good optimization to work on.

On the other hand, what if a software marketer decides to replace a pre-recorded process improvement webinar with a live one? People might be more willing to sign up for the webinar, which means the micro conversion rate would increase.

But what if the pre-recorded demo did a better job of showing off the company’s expertise (and products) than the live demonstrators can do? Subscriptions, which correlate with macro CVR, might fall off. Speeding up the website might be a better option to look into, in that case.

Marketers should not think of secondary actions as useless or unimportant. They provide great opportunities to obtain segmented lists, subscribers, and followers which can, in turn, be utilized for remarketing campaigns, email campaigns, and social media ad audiences. Hubspot is a great tool for segmenting visitors, communicating with them, and identifying those that are likely to make a macro conversion. It makes proper messaging, with the stages in the buyer’s journey in mind, easy.

The idea is to drive macro conversions by attracting targeted and qualified visitors to the site and presenting them with compelling offers that result in form fills and a chance to build a relationship.

Now let’s bridge the gap between CRO and top-level strategy. High macro conversion rates are great but what about ROI? What about customer lifetime value (CLV), the total revenue a business can expect to earn from a single customer? What are the long-term goals and how does the data help to answer questions about how to achieve them? These are the most “macro” of questions.

Sufficient data for calculating CLV is relatively difficult to gather because few customers will convert enough to give the marketer a reliable indication. However, CLV is extremely useful to managers. On the other hand, secondary action data is abundant but is typically not very useful for decision-makers who are concerned with top-level goals like ROI.

The hierarchy of importance/usefulness vs. ease of obtaining would look something like this: 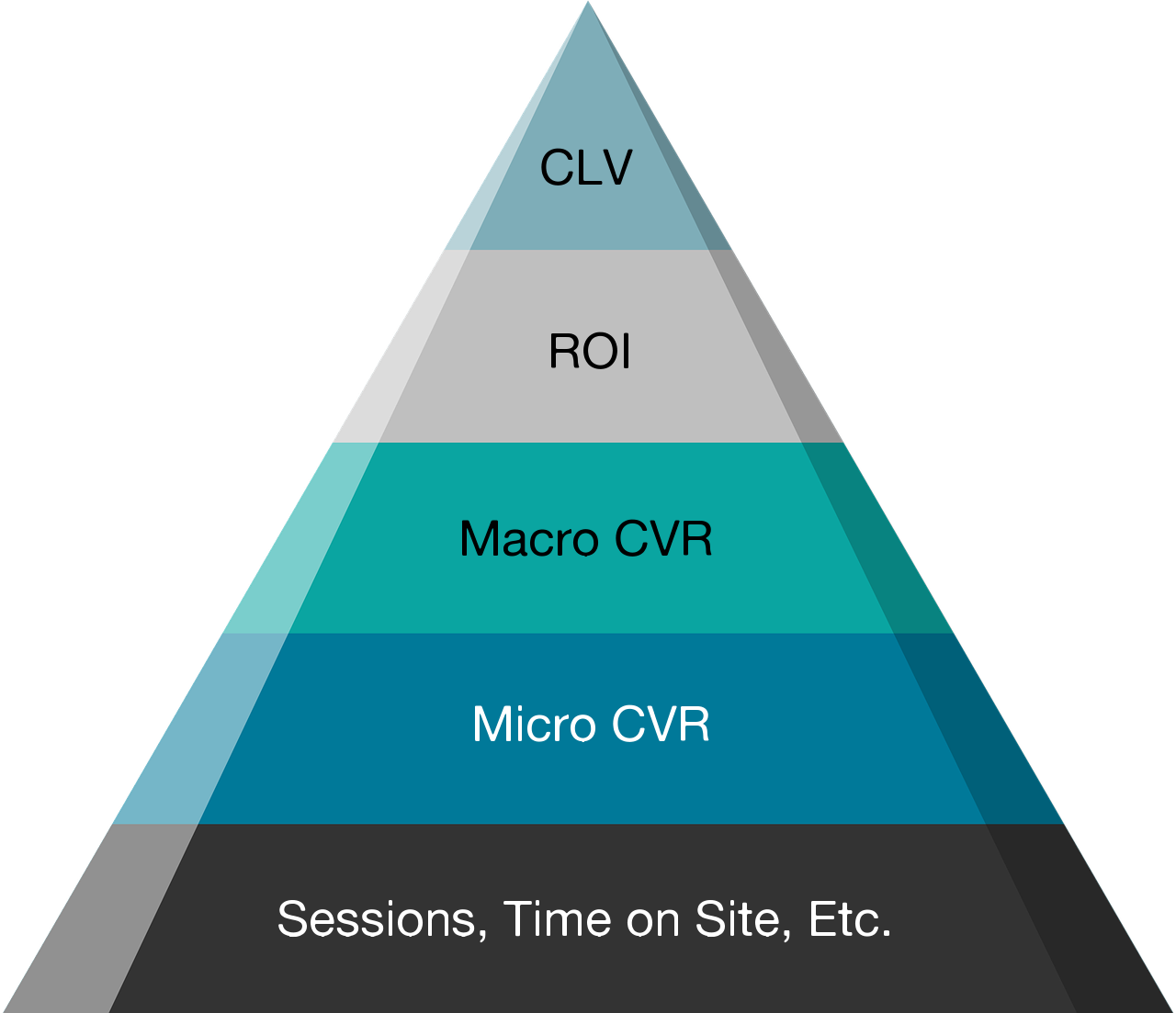 Keep in mind that this could shift depending on specific scenarios of every company. Process milestones might be much more important than secondary actions for some marketers, which would mean another level in the pyramid would need to be added. Businesses that earn revenue from advertisements might focus on bounce rate (not mentioned in the image), as another example.

Optimize the highest-priority conversion action for which there are enough resources and data. When it’s time, start working on another one. It’s rare to be able to answer big-picture questions such as “what is the average customer lifetime value of a product line?” when a data analytics system has only recently been set up. Think of answering that question as a goal. It may take a while, but optimizing conversion rates lower in the hierarchy will keep the team moving in the right direction.

A business that has exceeded conversion rate goals for all its macro conversion actions and has an impressive return on investment will naturally want to look to process milestones. These are things that affect marketing performance in ways that are difficult to measure, as we discussed earlier.

It’s not a good idea to make changes arbitrarily. Test some changes that have proven effective for other businesses, like adding a progress bar to a form. Neil Patel, a well-known professional in the marketing services industry, provides some data-backed suggestions here.

From a big-picture perspective, marketers want to have reliable data with which to attribute sales and customer lifetime value to conversions, channels, and campaigns. “Reliable data” means statistically significant data or data that's robust enough to give a strong indication.

If 1 of a landing page’s first 2 visitors makes a purchase, there’s no good reason to think the conversion rate will remain at 50% (one divided by two) as visitors keep coming. But If 250 out of 1,000 landing page visitors make a purchase, we can reasonably assume the conversion rate will remain close to 25% (250 divided by 1,000) if all factors remain the same. There are some fantastic tools available that help gather data and give us these kinds of insights.

Google Optimize, Hubspot CMS Hub, and Optimizely are A/B testing tools that can be used to maximize CVRs. The idea is to test slightly different versions of pages and gather enough data to show which one performs best. Things like CTAs (calls to action), form layouts, and headline text are commonly tested. A small change can make a surprisingly big difference.

Google Analytics is a free tool that is used for tracking website activity and gathering all kinds of data. It offers several different ways of monitoring progress along a funnel or path. In Analytics, “goals” generally refer to macro conversions. Goals can be almost any actions that a visitor takes on a site.

A marketer can set up a series of actions that might happen before the goal and then find out where the weakest micro conversion rates are. Here’s an example where “Reservation Complete” is a goal or macro conversion. All of the events above it are micro conversions that define one of many possible paths to the goal. The result is a simple visual showing how well each step converts.

Hubspot is the best all-in-one solution for making the most of every visitor by giving marketers personalized, valuable information that builds trust and maximizes customer lifetime value. It’s also a great tool for “closing the loop.”

For businesses with sales teams, it’s important to remember that nurturing leads in the sales funnel is as vital to the financial success of a campaign as generating those leads is. However, a big factor in lead conversion rate (converting leads into opportunities) is the quality of the leads.

Too much energy expended on poor-quality leads drains money away, so marketing teams should pay attention to lead conversion rates and try to maximize lead quality. When possible, monitor the lead conversion rate of every segment, every source, and every keyword. Then put more resources into the best-performing ones.

Short on resources but need to maximize conversions? O8 can help.